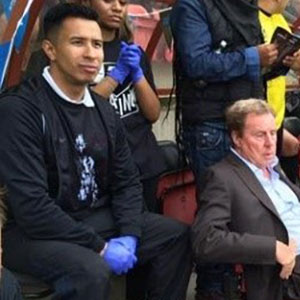 George Lopez qualified from Coventry University in 2006 with a BSc (Hons) Degree in physiotherapy. Prior to this George worked as a physio assistant in the NHS and private sector.   He spent a couple of years living in Colombia when he was growing up and where he perfected his already fluent Spanish.

When he moved to London, he identified a growing demand for physiotherapy care within the Latin/Hispanic community. Once he qualified he worked within this Spanish speaking community in London.  He later went on to work as part time Physiotherapist at Leyton Orient FC Centre of Excellence (CoE) U9-U16.  In 2008 he began working at St Christopher’s Hospice alongside Leyton Orient FC CoE where he developed many different clinical and life skills. The following year George was promoted to head Youth team physiotherapist at Leyton Orient FC, working aside Dave (1st team physiotherapist) and overseeing the CoE.  George now specialises in musculoskeletal sports injuries. After leaving Leyton Orient George spent time working at Orient Physiotherapy Clinic and the Ministry of Defence. He has worked at Woolwich Barracks, home of the Royal Artillery and Wellington Barracks which included; Kings Troops, Household Cavalry, Queens Band, as well as many others. During these roles George was responsible for soldiers both on ceremonial duty at Buckingham Palace and rehabilitating soldiers both pre and post operational tour in Afghanistan.

With a particularly keen interest in sport and keeping fit, George currently plays football for a local team and participates in ‘Cali’ salsa dancing (characterized by the quick footwork).  He also is an avid member of the gym with a particular interest in calisthenics , currently undergoing his UKSCA (UK Strength and conditioning association) accreditation.

George currently works with Premier League Referees on match day and at a local Premier League team alongside his clinics at Orient Physiotherapy Leytonstone and Romford Branch.